Know this book? The dictionary for potters.. Every now and then I flip it open to look up some word I can't remember and end up just..skimming through. I never really know what I'm looking for but I really just enjoy some of the words..because with my retarded, teenage sense of humor..I just find some of them so funny.

Here's a few of my favorites:

So here I am.. a Monday afternoon after two weeks of kids classes. No pics. Sorry! but... that's ok. I"m sort of glad it's over.. I mean, I'm glad that I can get back to normal for at least a few weeks before the next round starts. To say the least, working with 9-12 year olds is challenging and rewarding.. if you have the opportunity to do it, you should give it a go.

So now that we're done (for now), I thought I deserved a day to make a few pots for myself. We're planning on firing with Tara Wilson in the middle of August.. so I"m starting to get a few things made. I've realized that I have.. a few strains of ideas that I can't stop doing. There's the black, sgraffito pots.. and there's these impressed pots (not to mention a few others) made for the wood kiln. Here's the new ones.. 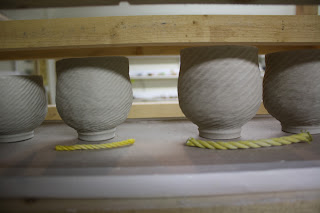 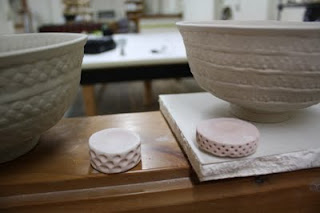 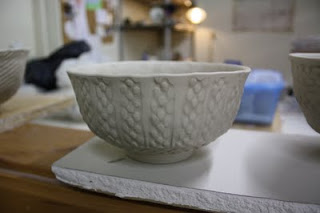 What else has been happening?

Crista was cleaning up a new paper cutter that our friend Scott lent to us. Crista is a really good book maker..and is planning to create some 40 new sketch books as soon as she can. She's recycled some old Readers Digest book covers (from the 1950s-1960s) from some local thrift stores.. They're so amazing.. (soon to be for sale!) Not to mention a book full of drawings from all the kids during the summer classes we're teaching. 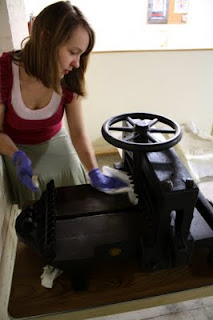 Also I've finally been using the new plaster troughs that Matt and I made. They're doin great! Once I fill one of these puppies up.. I'm getting about 50 lbs. of reclaimed porcelain. But.. I have over a year and a half of trimmings and scraps to recycle..I don't know if I can keep up with only three troughs. 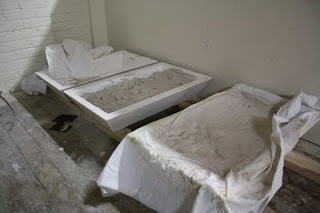 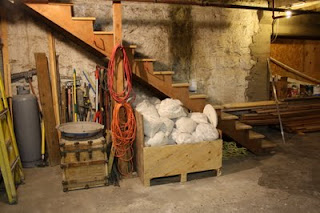 And of course..everybody knows that with wood firing, comes wood prep- Here are a few shots of the log pile Tara has near her kiln. Every few days, I or Crista and I both, got out for a few hours and either use the saw..or splitter. 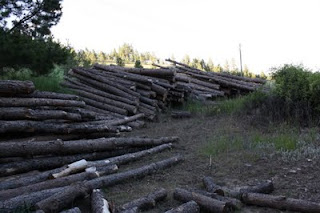 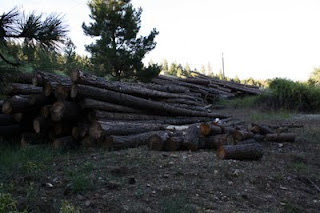 A good ole friend of mine got me watching a series of short videos on Youtube called TADS, which is short for.. "touch another dude softly". The videos are for sure hilarious..and a little disturbing. Or maybe you just have to enjoy uncomfortable humor? I don't know.. but anyways, Ernie Gentry, said good ole friend, and I decided it would be funny to play this on Tony. Well, Ernie... you were right. This indeed, must be the happiest day of Tony Clennell's life.. in Logan.

Tony, thanks for being there... so I could touch you softly.

I hope everybody enjoys a quick view into..just how retarded, or should I say awesome?.. we were during school.
Posted by bfreeceramics at 9:37 PM 3 comments:

it's a Business out there 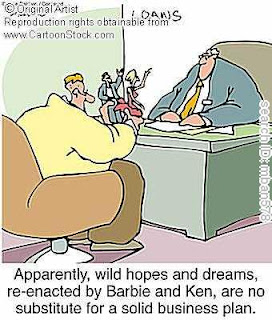 I think I've been at this stage of business thought for a long long time...

Another day another dollar.

Yet again I'm reminded of the business that I"m involved in. Free Ceramics had their first business meeting in like.. 2 and a half weeks this morning. Ever since the Ceramics Monthly article and the event at the Bray.. we've been swamped with emails and orders for more pots. The galleries we sell at can't keep enough work on the shelves. The next round of kids classes are starting in about a week. Busy is good, right? Yahh.. busy is good. If I can just keep myself focused.. be aware that I live in one of the most beautiful places I've ever been and to not be content to watch the summer months fly by without being outside.. if I can do that, I'll be ok.

Before I graduated from Logan, I knew I was going to be involved in this... and I had no idea how quickly it would grow. Nobody really talks about the business side of pots while you're an undergrad. At least the professors I've had didn't talk very much about it. But I suppose that's why I wasn't a business major... but at least a little would have helped. I don't know what I"m trying to say. I guess you just never really know about anything until you try it. Theory and practice. You can theorize all you want to until you're blue in the face..but never will you understand it until you give it a go.

There's a whole lot to it.. and it's pretty difficult with three people working together.
Posted by bfreeceramics at 10:58 AM 1 comment:

Horsing Around (the new space) 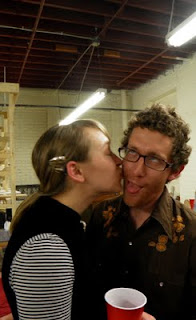 During the Archie Bray's 60th, Marco Rosichelli and his buddy, Josh Almond, curated the following show..which I think was totally awesome. How about that huh? A mixed media show right here in Helena, Montana! There was even a piece made of human hair! Not so small town, huh??? The piece wasn't cool just because it was made from human hair, but because, well, it was a damn fine piece. Not to mention a lot of the other ones were pretty awesome too. My favorite was the big print of the Unicorns and also the images with the pixilated horse mouths. 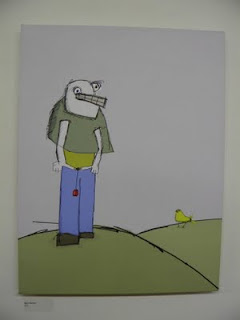 This is one of Marco's screen prints. He's really good. That print wasn't in the show, but was for sale in our space. I thought you should see at least one of them. Thanks for everything you did, Marco! The show really looked incredible. Josh and Jeremy, hats off to the both of you. Fine work. 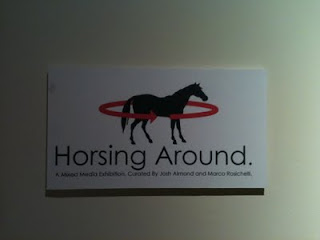 Right next to the studio where I work.. there is this super long hallway. One month ago, it was a sh*thole with a whole lot of stuff piled everywhere..oh how I wish I had a before shot. Marco, our good new friend who's been working in the same building with us, and also partnered with Jana Evens (long term res at the Bray)..along with help from a few recruits he brought in from Arizona, (Jeremy and Josh..woot woot!) not to mention Matt, Mark, myself and lots of other people..totally flipped this space into a new and improved area..specifically for this show and others to follow. (I have some great ideas brewing for this space.. not only as a permanent gallery space for Free Ceramics but also for curated shows, such as "Horsing Around"...) I'm thinking...a ceramic and print show. I think that would be soooo great.

Here's a few shots of the show: 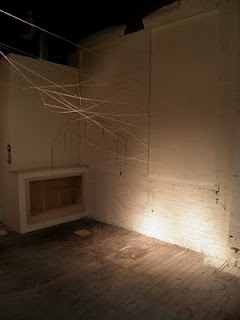 (the piece made of human hair) 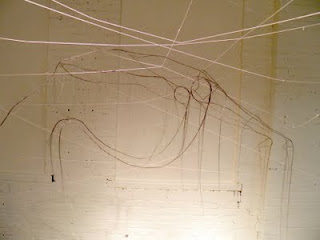 The following is a video of the Digital Piece that seemed to fit perfectly in the back area of the hallway. 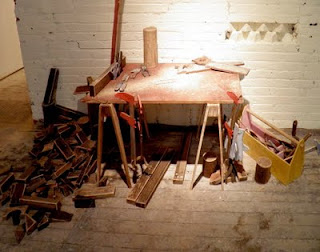 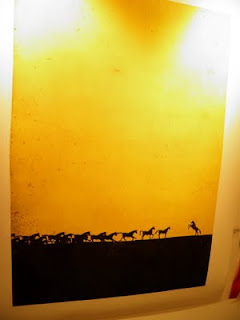 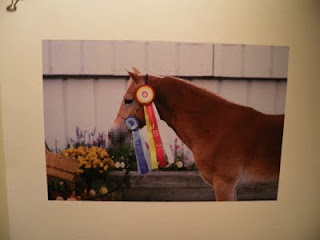 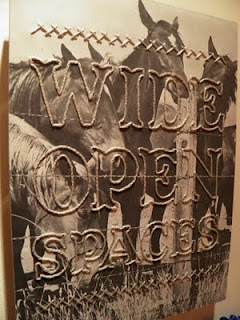 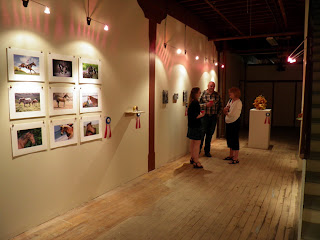 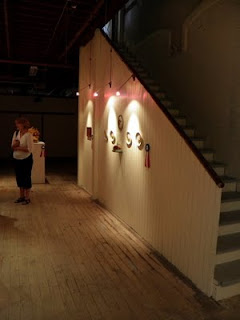 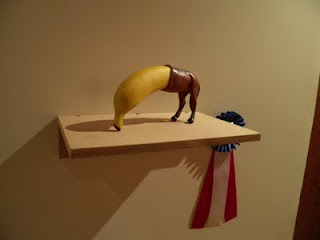 So this was one of the three things going on in our building at our "pre-opening" opening, last Tuesday. Wow..seems like forever ago now. Or was it two weeks ago already? Holy hell..I only started working in the studio again just two days ago..
Posted by bfreeceramics at 8:47 PM No comments: