The stack before the storm

For the last week I've had the pleasure of scraping about 200 old crusty bricks... doing so in anticipation for the, what I said last week, the soon to be stacked stack. Usually the kiln day happens on every Sunday. But today, being Saturday, we were ahead of the game. Last night I had some friends and part of the kiln crew over for a much needed veggie themed potluck. I don't have any pictures of it..but to say the least the food was excellent and the company even better. I have to say this again, but if you can ever pull off a vegetarian themed potluck, the food will almost always be excellent..because people just can't bring chicken or whatever is super easy..they have to stop and think..and maybe open a cook book.

Towards the end of the evening, Scott and I pulled out the computer and looked at some pictures of the kiln and started to talk about all the ideas and possibilities of things that could happen. It's been awhile since we really sat down and talked.. I've been here and there for so long it seems. But it got us riled up enough to make something happen. It was nice to get back on the same page. 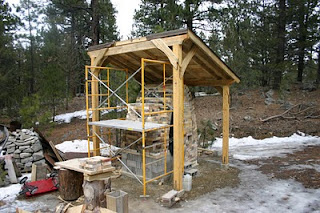 Around lunch time I came home after doing some errands and found an email from Scott, not 5 minutes before, saying that he had set the scaffolding up. Come on Bobby, lets play!!!

I whipped together a couple PB and J's, an apple, some juice and some chips (wow sounds like a classic grade school brown bag lunch huh?) and raced over to Unionville to meet up with Scott. Indeed he did have the scaffolding up and almost right away we began moving brick. I took the first round of laying brick and then later, Scott did. Once we had the stack up to the shed level, Scott brought out his drill and removed some planks so we could continue through the roof. 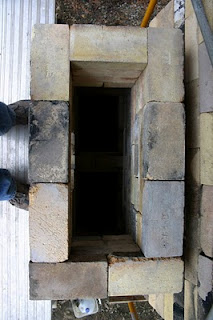 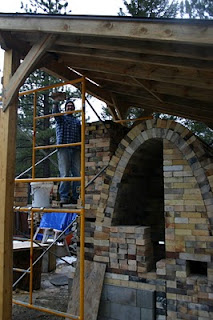 It was a super nice afternoon..which started out at about 45 degrees and ended with a frozen windshield at about 4:45 pm. The high tomorrow is going to be somewheres around 15 degrees..and I'm so happy that we pulled this off today. The next week is going to be wicked cold.. so I'm so happy that we stacked this super sweet stack before the weather really gets frigid again. Since the arch and interior volume is a bit bigger than the plans we had, we're going to add a few more feet to the stack, which we didn't quiet get today..but.. I think this is a great big ole step in the right direction. 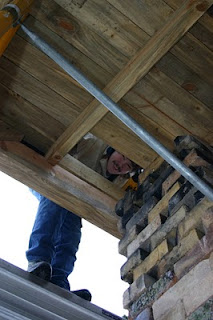 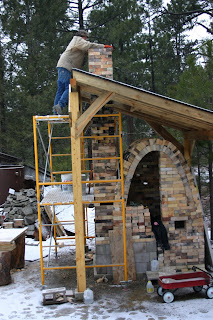 I'm really proud of the fact that these bricks are all used... I hope that it lets people out there know that even if a brick is super crusty on one side..it just takes a few carefully aimed whacks and the brick facing the other way..and you can use that brick yet one more time.
Posted by bfreeceramics at 5:54 PM 2 comments: 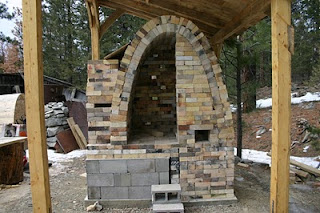 I made it up to the kiln for a little bit today. Not a whole lot going on..but the weather was mild enough to tolerate scraping a few bricks in preparation for the soon to be stacked stack. As you can see we're getting close to the end. Have I said that before? Probably. During the holiday break while most of us were away, Scott took the effort and time to finish up the back wall. Looks good, right? One of the nicest touches that I'm really into are the spy-holes. Notice how they're notched on the inside and out? That's going to give us such a large range of vision when looking inside. Also, for whatever firing is going on, if the people choose to spray a water/soda solution into the kiln from these ports, they will get more soda on a lot more pieces. 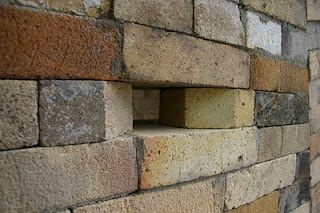 Having brick from a great old soda and salt kiln means we picked up a lot of bricks with some super great surfaces. Not only are the surfaces juicy...but some or just downright gorgeous. I wish I could use them all..but I'm excited about peppering in a few of these golden oldie bricks for another round of use. All I had to do was just chip away the edges so they'll still stack straight. It should turn into a nice looking stack. 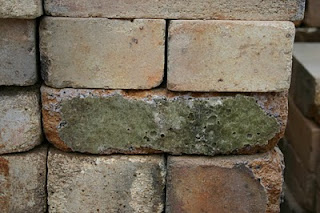 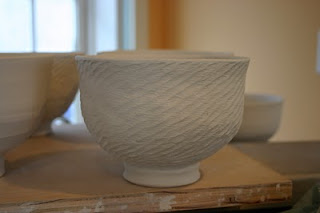 And can you believe it? I've been making my own work again. Here's my latest kick that I'm preparing for a few woodfirings coming at me in February. I've done plenty of rope impressed pots before, but it's something that I always like to come back to..and I'm really liking the way these are coming out. Since I'm rolling the rope while the pot is still so wet, the impression is showing through onto the inside of the bowl. Also, instead of rolling the rope and trimming the foot, the clay is still soft enough once trimmed that I can roll the rope all the way down to the foot ring. A friend back in Utah saw me trim once and said he new people who made their pots at an even drier state, let alone trimming them. I'm a big softy when it comes to making and especially trimming.. unless I need to throw something tall?...then the stiffer the better. 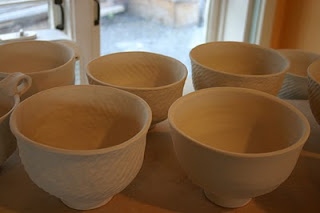 Posted by bfreeceramics at 2:11 PM 4 comments: 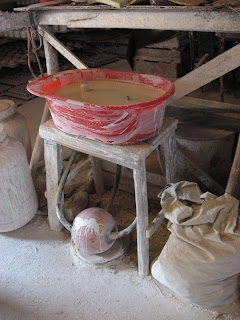 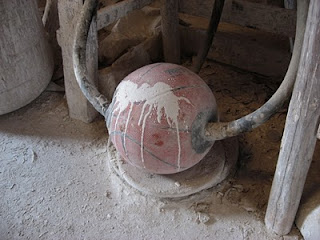 Improvise: Verb. to make, provide, or arrange from whatever materials are readily available.

I think most potters, if they're serious... can build just about anything they need. it comes with the position and the fact that we cant afford everything new, or the thing we need just isn't in existence.. so what do we do? can we build it? yes we can! (bob)

Because I don't have a camera close to show you the pots I've been making I thought I'd flip through the archives again and pull something that looked cool. Well, here it is...

Can anybody guess what it is and what it does?
Posted by bfreeceramics at 1:18 PM 3 comments:

I was told that when a potter becomes a potter, when they sit in their studio and make everyday, all day.... their skills explode. The last week or so I've been trying to spend as much time in the studio getting the work done I need to do for Free Ceramics and at the same time begin to make some pots for myself. For the last half a year my own pots have taken their time to cool off and sit patiently in the background of my daily life. Which is ok. I understand that things happen and I have to adjust to those things. I've had a lot of time to think about my pots. I've tried a few things.. made a few kiln loads, gathered a crap load of brick and almost have a finished woodkiln and I've been lucky to sell some of those pots. While I was in the studio tonight I unconsciously did something that I hadn't done for so long and what an amazing pleasure it was once I realized what was happening. I had made a board of bowls, which I really liked.. I trimmed them at their perfect, or my perfect, time and state of wetness.. I enjoyed every moment of it. Once the bowls and a few cups were trimmed I was looking at a couple of them and imagined a handle or two. So I did it. Now. that might seem like a normal motion for most makers out there.. but at my job I have a certain line that has to be made and these types of spontaneous acts of creativity are to a minimum and must follow a kind of style.. so it doesn't happen often. So... handles pulled and attached to the rim of a bowl and two handles attached to a couple of my yunomis. Magical. I just made two new forms and I'm excited to see where they can go... And now I remember once again why it's so damn fun to sit and push clay around. It's satisfying to see what you're capable of doing and then to see it keep growing...

No pictures today my friends. My camera broke last week while I was in Utah seeing Robin DuPont's graduation show.
Posted by bfreeceramics at 9:04 PM No comments:

Hello internet people, whomever you are... if it were at all possible to extend a true hello to you through your whatever electrical device it might be... i would. so Hi there. I read blogs too. It's totally cool... 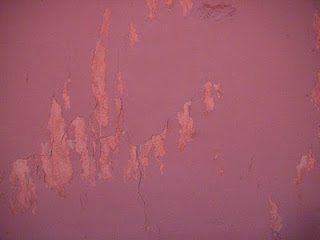 I'm feeling up for a post about something I saw a long time ago. well, not really that long ago.. it will be 2 years ago next summer. Does that still count as fresh? Maybe...maybe not. Anyways, a little back story on these four pictures. I was in Korea. Or was I in China? Uh..Korea. Yah. ....So I'm with some fellow students walking through an "ancient" korean palace. It was amazing. Very historically correct. It was actually one of the most boring places we went to. and get this- the ancient onggi section was closed off!!! NooOOO!!!! so... and I spent a considerable amount of time trying to get into trouble instead. and I didn't even manage that. 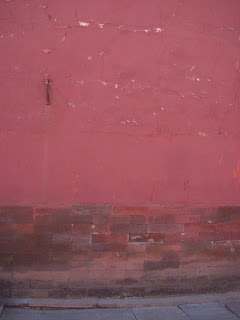 To summarize the story and without going into descriptive details.. these were some shots of a wall and doorway/entry way that I thought needed to be looked at a little bit more closely. it's fun to see compositions within the world huh? And especially if it's so random... and within this case, time orientated too. i love that shit. 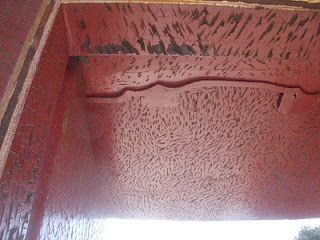 it was so out of the ordinary that it really stuck out to me... 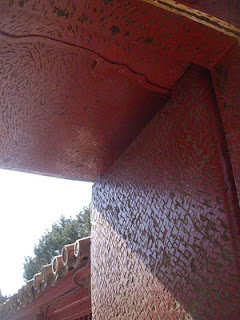 and it turns out that the chatter marks are a preparatory step for the door to be re-plastered and painted a solid color ( I asked an officlal guy with a lot of door chipping experience, so you can trust me.... despite popular belief, lots of things are true on the internet). Seems that this step is the same principal behind scoring clay and attaching another clay piece to said scored... thing.

Wow.
Posted by bfreeceramics at 11:49 PM No comments: