BrettKernArt.com - An email interview with the artist

So there's this guy, Brett Kern... who makes super radical ceramic work.  I met Brett a long time ago back in China when I went for a study abroad semester in Jingdezhen.  There was a group from WVU and a group from USU.   Brett was just starting his graduate career in school out in West Virginia....  I gotta say his work has really exploded since then and is a total representation of himself.  I remember hearing Warren MacKenzine say.. you can't just wake up one day and be creative.  It takes time.  It takes work...  The other night I was looking at Brett's website while wearing a pair of 3d glasses.  I was so impressed that I just had to ask him some questions and get his answers out here for people to read.  I hope you enjoy the following Q & A's. 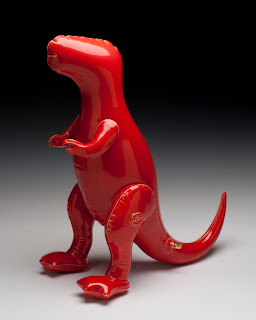 Q: So we met in Jingdezhen, China. How much did that experience influence your practice now?

A: For starters, it was a pretty humbling experience. When I got back to West Virginia, my second semester in grad school, I had no more illusions about what my work was supposed to be. Because of this, I think I was able to navigate grad school much more open-minded than if I had not had this experience right off the bat. There were still some bad habits that it took a while for me to break but in end, things seemed to have worked out.

I’ve also been able to appreciate and benefit from the way the ceramic making processes are so divided and specialized over there. The “thrower” throws and hands the pot off to the “trimmer.” The “trimmer” trims the pot and then someone else glazes it. When a person needs glaze, they just go to the glaze store. I started gradschool with the mindset that I had to do EVERY step in the art making process or somehow I was cheating. Now, I buy all my glazes. I buy slip when appropriate. I hire people to make wood frames and piece-specific cottle boards. This way of thinking and working really frees me up to focus my time on the most important aspects of my work. Ultimately, it results in a superior finished product and I believe this new way of thinking was a result of the time I spent in China. 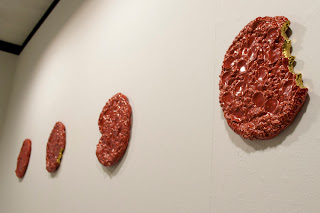 A: Looking back, there are quite a few things that seem pretty crazy. The pizza I cast might win the award for “craziest” because it was a little messy. When I separated the mold, the crust went one way and the cheese, sausage and sauce went the other way. I was picking sausage and cheese out of the mold for days. The inflatable dinosaurs were pretty crazy too just because pouring plaster on something so large that moves and compresses can get tricky. I wasted a lot of plaster getting it right. If I broke one of the large dinosaurs molds, I don’t think I’d have the energy to do it again. 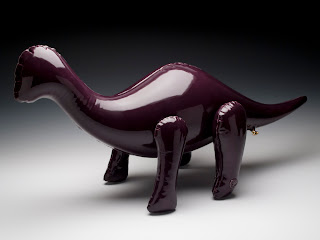 Q: If you had a choice between a t-rex and a velociraptor, which would you be and why?

A: I’d be lying if I said I hadn’t thought about this question before. My choice would be a Tyrannosaurus Rex. Velociraptors always struck me as evil and malicious. They’re devious and they WANT to hurt you as much as possible. I most closely identify with the way the T-Rex is portrayed in the first Jurassic Park. The T-Rex just does whatever it wants to do and as long as you stay out of it’s way, you’ll be fine. Originally, the T-Rex is the bringer of destruction but in the end, it saves everyone’s life. It’s fun not knowing if you’re supposed to love or hate it but I think either way, you respect it. 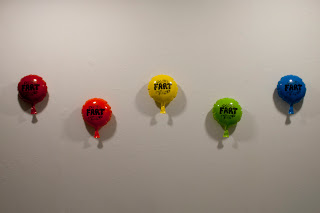 Q: Do you take yourself seriously?

A: Well, I just wrote a paragraph about how I’m more like a T-Rex than a Velociraptor so…no.
I’d like to think I have a pretty good sense of humor about myself and about life. I can’t imagine my work would be the same if wasn’t able to laugh at myself a little. 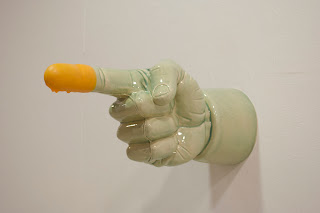 Q: Describe your childhood and how it's influenced your work.

A: I’ve heard countless ceramic artists talk about how much nature has influenced their work and each time, I can’t help but recognize that that just isn’t the case for me. I grew up in cities and I can’t really remember enjoying outdoor activities. My earliest memory is getting an inflatable dinosaur for being “good” at the hospital when my sister was born (I would have been a little over 2 and a half.) I was the middle child of three and had to rely on entertaining myself much of the time. My favorite things to do were to watch movies, play with action figures, watch TV, and draw or make things. I can remember not wanting to go to baseball practice or church but while there, spending the whole time there thinking about my Jurassic Park toys at home. That’s where my mind was for one reason or another. That’s where my mind still is only now it’s my job. Basically, I’m trying to use clay to show these objects and mindsets as things that possess value and longevity. 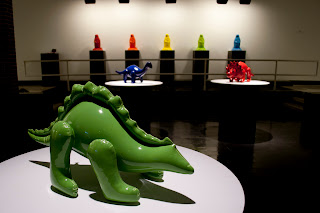 Q: How important is pop culture to your work and why?

A: It’s very important. Like I said, watching movies and certain TV shows were and are some of my favorite activities. My formative years took place during the golden age (1985 – 1995) of cinema and shows like Seinfeld and the Simpsons. I wouldn’t be making dinosaurs right now if Jurassic Park never came out. I wouldn’t be casting pizza if I never saw Ninja Turtles. I credit watching the Simpsons as a child, for better or for worse, with forming the backbone of my personality. The show had a brilliant way of combining really intelligent jokes with just the lowest humor possible. This lowbrow/highbrow combo is the main reason they’ve been able to maintain my interest for such a long time and it comes out in my work. I enjoy trying to come up with a though-provoking piece and then following it up with a fart joke.

After all these years, these shows and movies are the things I still get excited about and I still spend a good part of my day referencing them. It took a while for me to realize that the preoccupation I had with these specific icons of pop culture wasn’t something negative, but rather was one of the more endearing parts of my personality. It was after I embraced this that my work actually became honest, personal and unique. I am a product of a certain era in pop culture history and I like to think of what I’m making as the fossils that will preserve it. 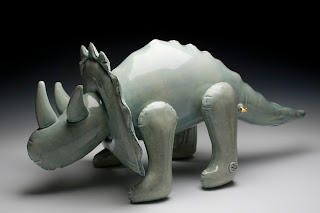 Q: Where do you think you fit into the contemporary world of clay?

A: It seems that in the 21st century, there have been a growing number of male ceramic artists who have embraced a more playful, silly or whimsical aesthetic in their work. I guess I’m part of this movement. 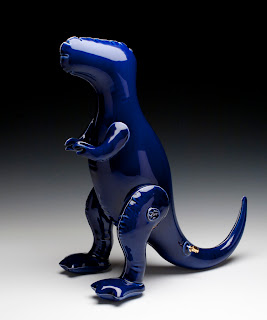 Q: Has teaching at a college level helped your work progress?

A: Yes of course it has. There are just so many more opportunities, when you’re teaching, to look at work and then try to figure out what is wrong with it. The more I teach the better I get at being critical towards my own work. 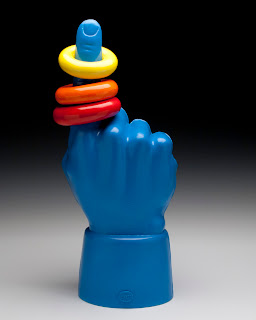 Q: The Internet has opened the world of ceramics to a vast audience. Photos and information about clay can be accessed so easily and quickly. How important is your Internet presence to selling work or exhibiting? Any thoughts on the future of the clay/internet relationship?

A: Most importantly, the Internet gives everyone the ability to create a much more personal relationship to the work in question. I’ve been posting photos of my inflatable dinosaurs since the week I conceived the idea over a year ago. Anyone who has followed my Facebook page has been able to watch these pieces grow through all of the processes involved in making them. On Instagram, student artists I’ve never met will ask me questions about making work and I’ll be able to answer them immediately. There’s no doubt that this connection has led to many more sales and much more exposure than I would have had otherwise.

Artists that can really pull off a certain level of interactivity with their fans will thrive in the future. I’m not talking about just posting pictures online for people to “like.” It’s important to involve the audience. I think what Adam Field did at this past NCECA with “Hidenseekah” was a great step in that direction. Shoji from WVU walked around NCECA taking photos of people holding a Jennifer Allen mug. From home, Jen decided which person’s photo was her favorite and that person got the mug. I’m running a sale on my Facebook page right now where people can get a huge discount off my work if they go see Jurassic Park. Fans are sending me hilarious photos of themselves holding ticket stubs. It’s great! I also handed out 3D glasses at NCECA and if people go to my webpage, there’s a 3D gallery of my work they can view. The problem is that this sort of thing is so new that there’s not really a blueprint to follow. I got my MFA in 2010 and Instagram didn’t even exist yet. Now, I post photos to it everyday. It’s the artists who embrace this technology, and innovate the ways in which we utilize it, that will flourish. 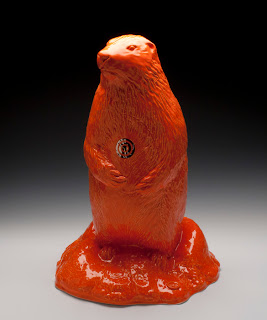 Posted by bfreeceramics at 10:38 PM 4 comments: