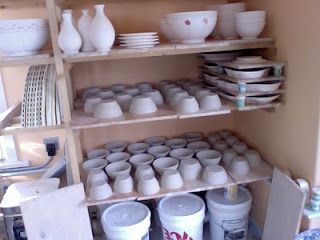 Working as a production potter during the week hours... I think back to my trip to Jingdezhen I took just over three years ago. If you've ever seen production, I think Jingdezhen is the mother of production... it's unbelievable.
Yesterday I felt good about being able to sit and throw down 51 bowls. I thought..Holy shit I just accomplished in about 6 hours what it took me 2 weeks to finish in my first intermediate throwing class (oh i must have a degree!). Now and then, like yesterday, I feel real proud of myself and think I'm hot shit... then something grounds me, like this guy: 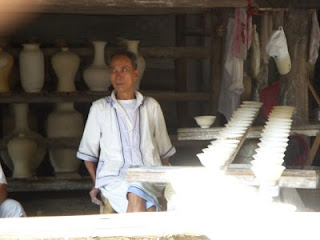 I couldn't find a picture of the thrower, but this guy trims, and the thrower throws...easily into the multiple of hundreds of bowls a day.
When I think of these guys..I realize... I still have a long way to go... not that the numbers are what's important, but the ease and natural movements that comes with throwing so much..and then the mindlessness behind it too. The quieting of the mind. That lovely time when the voices calm and take a break.
Posted by bfreeceramics at 9:52 AM No comments:

What is nearest to my wheel are three things I hold dear to my heart. I’ve had these for the last couple of years, but what they mean I’ve carried for most of my life. 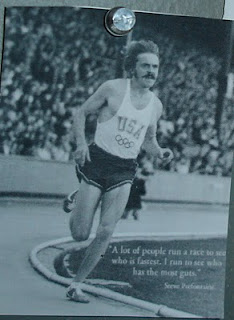 My first hero is a runner from Eugene, Oregon, named Steve Prefontaine (nice stache). I grew up in Roseburg, Oregon, about 60 miles south of Eugene. During high school I ran the 3000, and 5000 meter races. When I first learned of Prefontaine I was immediately hooked. It’s not that I wanted to be him, but I could relate and respect what he was going through as a runner, just like I was. There’s a quote on this picture that reads, “A lot of people run a race to see who is fastest. I run to see who has the most guts”. You just might know about Steve and the type of man he was towards the end of his life. I think my next hero and Steve had similar personalities. 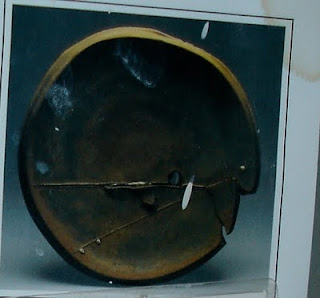 My second hero is Pete Voulkos. Like Steve, Voulkos pushed the limits of what he was committed to. He went further and faster then anybody had yet to do. He’s also a local for me here in Helena. I suppose I have an affinity to the local team. When I can, I go to garage sales, estate sales, or the second hand stores around town, always hoping for that lonesome Voulkos pot sitting in the corner with 60 years of dust on top of it. I know they’re out here… Voulkos made a lot of amazing pots while at the Bray. The progression of his work is what I like most about him though. To see that progression of work and how his ideas and thoughts changed is so inspiring. Like Steve, I don’t want to be or make a Voulkos pot. But I can take parts of what they are, or were and aspire to reach as high. 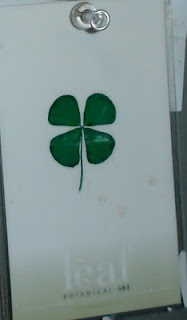 The last part of my trifecta of inspiration comes down to plain old Irish Luck. I’m more Scottish then Irish (I do love to drink though), but who cares anyway? I have a red beard..and that’s enough for me. I believe that a lot of what happens to us, just happens and there’s no real reason behind it. I don’t believe in predestination or something else out there controlling my future. It’s not that I believe in Luck, I just see it as an adjective to what happens, good or bad. Basically, Luck is just what it is- nothing and everything. The best way to describe Luck is to call it “random”. It’s not controlled by odds or anything like that. I had to come to realize that there are just some things out there we have no control over… and not having that control is a part of what makes our existence so right.

I think of these things when I work sometimes. Now that Crista and I have set up our new studio I found these little pictures in a box and put them back near the wheel. I’m excited to get to work again..and just make my own pots when I can.

Posted by bfreeceramics at 12:20 PM 2 comments: 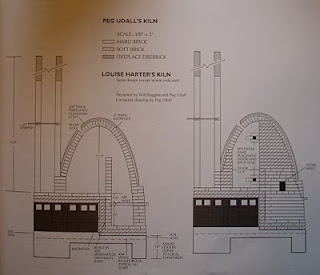 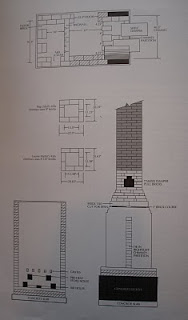 Now that I have some bricks...and the actual kiln not being a dream any more..I sent the word out to a few friends about what I wanted in a kiln... and they pointed me towards these plans. This is just the type of kiln I want to build. It's realistic, compact, and the turn around for firing will be perfect for me to load and fire. This is a dandy of a little kiln by Peg Udall in Jack Troy's book, Wood-fired Stoneware and Porcelain. I was thinking "the bigger the better" and I began to have dreams and wishes about tying in an Anagama before the arch...then realized I should just get this thing up and get firing. I've helped construct a couple of kilns but this will be my first which I'm in charge of. Later this week I have to transport another couple of loads to the site... Then it's time to clean them all and get them ready. Anybody have a lot of concrete they dont want? So far I've only put in labor and not spent a dime..I'd like to see just how much of this whole thing my friends and I can scrounge...
Posted by bfreeceramics at 5:09 PM 1 comment:

Keeping an eye out 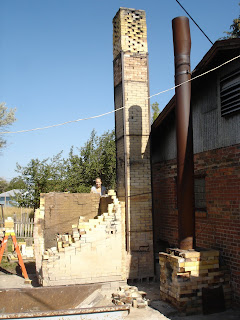 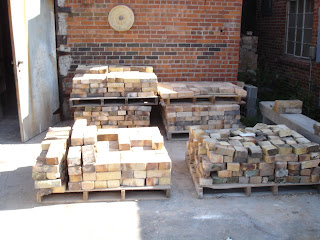 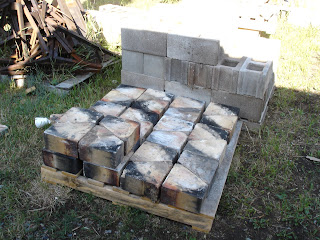 For most of the summer I've had the great opportunity to be volunteering and hanging out at the Archie Bray Foundation here in Helena, Montana. There's always some sort of opening happening, or gathering..or maybe it's Wednesday Growler day at the local brewery where all the employees and artists meet to have a good pint of beer. To say the least I feel extremely grateful for being where I am.... there's always a lot happening. (even if they did reject my application for being a resident)
About a month and a half ago, a local friend told me that I could build a kiln on his property, out in Unionville, just 5 miles out of Helena in the mountains. He has a good chunk of land and lots of trees. So.. since the time I got the official word that "yah, Bobby build a wood kiln here!" ....we've talked and planned. The only thing holding back anything is our total lack of firebrick.
That is....our total lack of firebrick until two days ago. At the Bray there are two old kilns outside the pottery that haven't been fired for about a year due to their..well, lets say "structural integrity". Residents and employees have been chipping away at the demolition with sledge hammers and no real concern with salvaging any of the brick. It didn't seem like anybody wanted to do this job...and it just looked bad. Two days ago I approached Steve Lee, the director, and said..."Hey dude. So.. those two kilns there, how about I take them down in exchange for any usuable brick I might get?" He was into the idea and I've been banging away at these things for the last couple of days. Only after seeing an entire pallet of soft brick did he say, "well...how about you take half the soft brick, those are sort of a premium". (I almost had him..... I'm wondering what else I have to do for all the softs...) And happily my very special girl came back from France a couple of days ago and jumped right into the project with me, gloves and hammer in hand.
I felt like a kid in a candy store. There are so many good bricks here! No WAY!!
I hope that by the late Fall I have these bricks cleaned up and a usable wood/salt cat kiln built so I can have a good old time during the fall and early winter months firing away... firing away and making pots for pots sake, because..damn.. we all know how fun it is to just make pots, explore new forms and fire a wood kiln.
Here's to keeping an eye out...and asking questions! woohoo!
Posted by bfreeceramics at 7:43 AM 2 comments: