bobbyfree.com gets it's first makeover 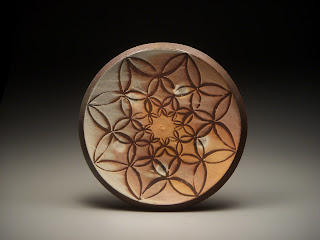 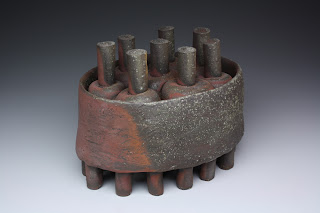 I revamped part of bobbyfree.com with a whole lot of new pictures of past work. I had a number of suggestions.. like making it so that people can click on an image and see it in a larger format. Thanks for the advice! New sections include soda fired ceramics, highlighting the cone 6 soda research I did back in Utah, a wood fired pottery section with some of my best wood fired pots, and the bfriz production section which features a brand new video I just finished a few nights ago. Check it out!!
Posted by bfreeceramics at 9:10 AM No comments: 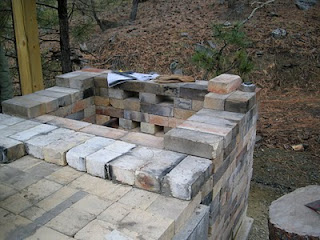 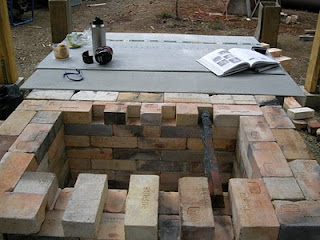 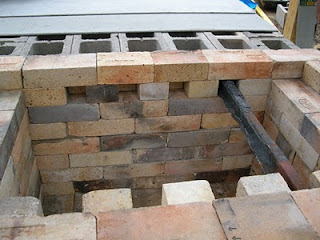 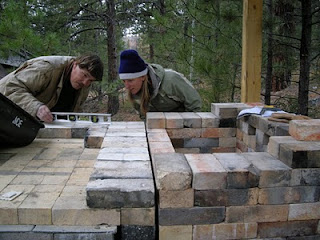 The days are getting shorter and the temperature is getting lower. If you're a potter out there, which I'm sure most of you are, you might have a few deadlines looming over your heads.. you might be busy as hell trying to get the last groups of pots made before your own Christmas Sale... especially now that all those galleries you show at have been stuffed with some nice new work. With that said, where can you find the time to work on things like a wood kiln?? In my case, I can't. I had to say "tough doo-doo" to myself and sit at the wheel instead of laying brick. I'm glad I roll with such an awesome crew that really wants to see this kiln done regardless if I'm not there. It's not really a big deal.. these folks are pretty smart. So who took the reigns and got things organized and moving forward?? Andrew Chanania. That's his website..give it a click to see his pots. I've mentioned Andrew before in some previous posts, and he's made quite a few appearances on some of the video, but I never did talk about him. Andrew is a bad ass soccer player. He also makes some damn fine pots too. Not only that... but he's an avid IPA drinker at the local brew house down the street. If there's a number of ways to tell if a guy is alright... just notice what kind of beer he drinks. Other then that Andrew was educated at one of, if not the top school teaching clay (i'm glad he makes pots and not clouds.. yah you know what I'm talkin about!) and then spent a couple of years working with Chris Gustin, who is himself an awesome soccer player- nah just kidding. I don't know if Chris plays soccer..but Chris is a damn good artist and a great mentor. To say the least we're lucky to have Andrew around for sure. Here's what the team accomplished... They layed a few more courses of brick, put down the cement board over the cinder blocks and got the firebox up to the level of the stoking door. yes! Thanks for keeping the ball moving up the field guys.
Posted by bfreeceramics at 9:50 AM 2 comments: 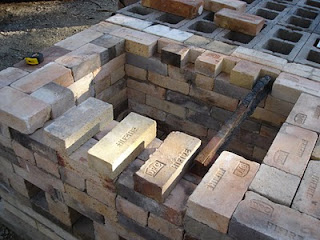 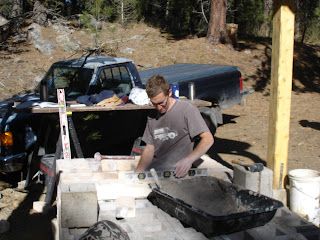 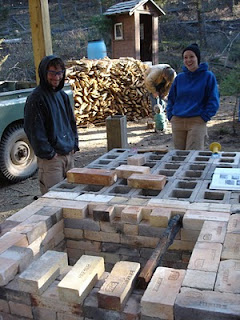 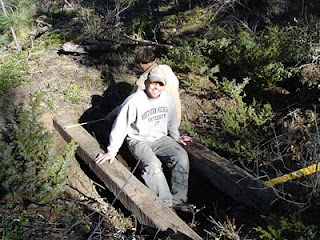 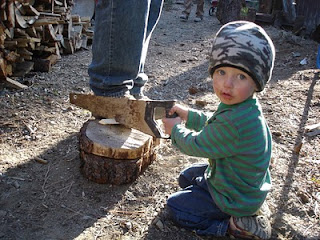 We finally made it back up to the kiln site yesterday for the much anticipated Kiln Day 6. What a gorgeous day. Can you believe that the temperature was warm enough to take off the sweatshirt? We’re not going to get many Sunday’s like this anymore…the weather is quickly becoming colder and the possibility of snow looms on us as the days get shorter.

With the added bonus of the sunshine we arrived at the kiln close to 10 am. It had been so long since we all had been up there that it took a bit of time to figure out what the next steps had to be.

We stopped in to see Scott since none of us told him we were planning to work that day. Inside the log house we had a little chat with Scott’s dad who was cozy by the wood stove with his feet up and a cup of coffee in his hands. It was tempting to stay.. but we needed to work on our own wood stove. We gotta get this thing done… Can somebody give me a full week? That’s all I need. There’s just too much stuff happening to really commit the time the kiln needs to get finished by the end of this moth. I think we’re still on schedule to finish up by our prediction of the end of November.

The highlights for this Kiln Day was cutting the bricks for the Grate Bars, which Matt was extremely skilled at, Crista nailed out the cinder blocks perfectly and Scott and Matt started to lay out the site for our soon to be installed outhouse. We’ll be firing in style for sure with a covered place to do our business. No more digging holes for us. We’re livin it up fancy style!

Special thanks and appreciation go out to little Clayton for doing some of the initial wood prep for our first firing!

If I can I’ll post a new video later this week. My sister and I are firing a salt kiln Tuesday and I have some new forms I’m feelin good about.
Posted by bfreeceramics at 8:52 AM No comments: 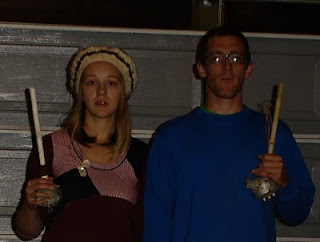 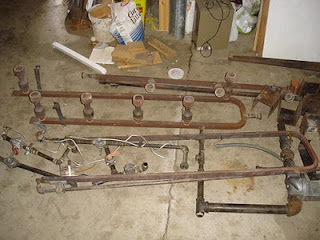 For the last couple of days I've been in a tiny little town in eastern Washington State called, Palouse. I'm here with my special lady-friend, Crista, setting up a small solo show she's having at the local gallery, which she's been represented at since she was in college. We wont be getting back to Helena until late Sunday night, which means...no Kiln Day, 6 this week - Bummer. Yet even though we're almost 400 miles away, the Kiln Day has emerged regardless of location. Let me explain...

Two days ago we spent the first half of the day setting up Crista's show, which was full of unexpected twists and turns. To say the least, once it was done we were happy to get out of the gallery and walk around the main street, seeing some antique shops and making the easy decision to hit the tavern for a beer. As we walked in, Cirsta recognized a man sitting amongst a group of guys at a table near the bar. She introduces me to Tim, an older gentleman of maybe...55-58 years with short white hair. He was drinking a 16 oz. can of Keystone light. Tim is the sculpture/ceramic studio tech at WSU where Crista earned her undergraduate degree. Just a semester ago Tim dismantled some old gas kilns, a 50 and 25 cubic foot, that had to be replaced. Tim squirreled the remains away.... not having the heart to throw them away- a true sign of an excellent tech. Once we told Tim about the small wood kiln we've been building he said, "Well hey, you know about those kilns we replaced? I have a bunch of steel and some bricks you can have.. just come by later and we'll load you up."

Yesterday we met Tim at the school and we loaded the truck down with a whole lot of steel and angle iron, about 100 more soft brick.... and the big scores were the 8 Venturi burners and 2 thermocouples with a good length of wire.

This is excellent news my people!!! Now we have enough metal to secure the kiln, make the stoking doors and a way to read the temperature during the firing. I'm going to buy a digital readout for this guy and be able to track the firing up and cooling down of this kiln... I'll have a solid way to continue some of my cone 6 soda, reduction cooling research..now plus wood.. I was into back in Logan a few years back. Bang on!

The odd picture of Crista and I is our silly tribute to "American Gothic". Thank you Mr. Wood!
Posted by bfreeceramics at 10:01 AM 2 comments: 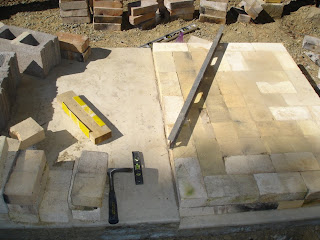 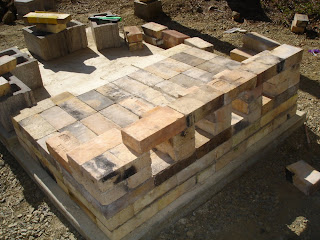 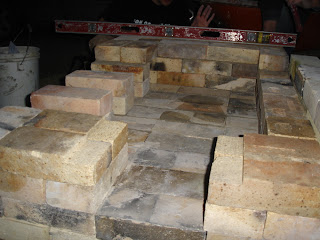 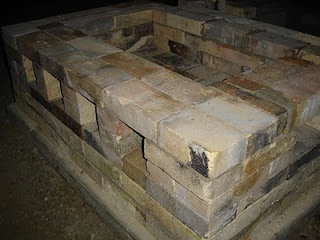 Waking up early after a long week of work for our Kiln Day felt as if I’d slept in all weekend. The night before I was up until the late hours reviewing the plans and doing some drawings of what I thought we’d get to. I’ve noticed that this kiln has kept me up late into the night with my head running around in circles. I’ve been dreaming of it, other kilns and firings more often then normal… if I don’t work out what’s on my mind with some drawings or notes... I can count on only a few hours of sleep.

Scott told me, after the excitement of building half of the beautiful new shed, “Bobby… I’ve done my part and most of what I can do for now. The ball’s in your court, dude. Make it pretty and lay those bricks!!”

Now comes the slow, tedious, methodical and troublesome act of laying reused brick for our soon to be finished kiln. It was just the boys yesterday: Matt, Andrew, Scott, Clayton and I. Emily and Crista took the day to work on their own ceramic art, undisturbed, which doesn’t seem to happen very often. Andrew and I were on brick duty, laying down the first courses of soft brick, while the others worked on moving some wood, cleaning the place up, and pouring two more supports for the other side of the kiln shed.

Once the two layers of soft were down, we attached a heavy duty grit, 32 or 36, to a piece of 2x4 to really get that top layer zeroed and leveled for the first layers of hard brick. Boy that worked out well. By 1 pm we had the firebox floor in and the primary airs worked out.

Back in August when we dismantled those two kilns, we ended up with a lot of different sized bricks. A good chunk of those bricks are 3” x 4½” x 13”. The 13s are nice long guys which I want to use when I can but with the normal bricks (2½ ”x 4 ½” x 9”) we’re ½” too tall to throw them into any normal course. So the plan, as of now, is to use them when we have any kind of opening, like here for our ash removal. All we have to do is make a little shelf in the other bricks, ½” down and the 13 will line right up with the 2½"s.

Andrew and I took off around 3 pm to make our soccer practice and didn’t get back until about 6:30 pm, a bit later then we had planned. But we had enough time to level out our last course before it got too dark to see. Well, it got too dark to see real quick… so when we make it back out there we’ll really get to see how straight it ended up…and if Andrew can really see in the dark.

I’m headed to Washington State next week and won’t be back for the next Sunday’s Kiln Day. We’re all taking that Sunday off…it wont be until the 16th that we get back up there. It's going to kill me!! I’ll make an entry about what I’m up to, which is still about clay. My special lady-friend is having a show back there in her home town. Until then…
Posted by bfreeceramics at 9:08 AM No comments: