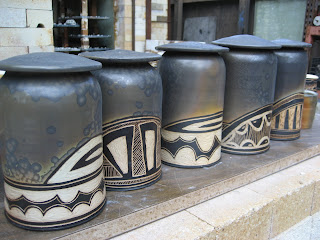 It's sort of good enough.  All the black glazes came out great..they did exactly what I expected.  Oh right..that's because I've used it a hundred times!  The other glaze?  My new and improved "Bobby's Sweet Ash" glaze..  eeehhhhh....  not so good.  For one, it came out a lime like, poopy green color.  For two, I applied it too thick causing it to run like mad!  Most of the ash glazed pots...were sort of failures.  I'm hoping that a refire in the gas kiln will brighten them up and settle out the glaze that seemed to boil a bit towards where it pooled..  It just did too much of what I was hoping for.  I went too far!  Hey kids, did you know that holding your kiln at a high temperature for a really long time will encourage your glazes to run even more!  Remember learning that?...because I sure do, but I didn't remember until it was too late!!  What was I thinking??  But not only that....  The glaze needs less ash and more clay to stiffen it back up. 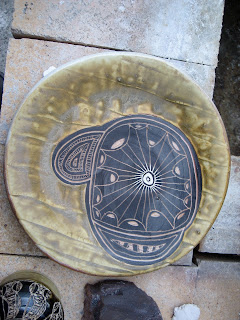 I've written about this sort of thing before..where pots just don't come out the way I plan.  What the hell?  I thought I was good at this.  I mean, well, yah, I'm good.  But I keep doing super noob moves now and then..   like one of those killer jars at the top.. I forgot to wad the lid. 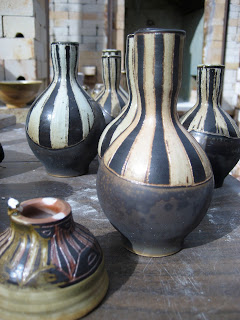 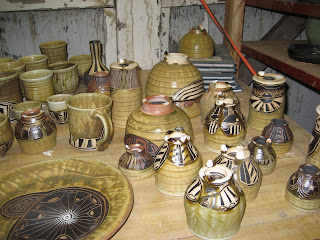 I mean, look at that carnage.  what a load of salty dogs.  I'm not even sure grinding them is worth it.  But I will.  I'll try to save them...  too much time involved to let go.  I'll grind..then refire in the gas..  and if they're still super ugly..to the dumpster they go! 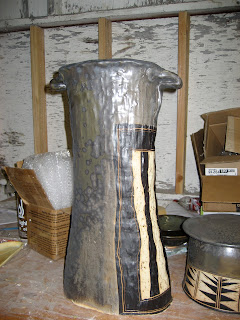 The big guys took the brunt and held up nicely.  One or two of these will definitely make the show in December... along with 3 or 4 of the jars at the top, and a group of bottles.  All in all.. at least it was better than my last firing.  Lets hope I only lose 25% from the next kiln load..and by the time I leave I'll have it down to 0%.  Jesus.. I haven't missed my little wood/salt kiln back home more then I did yesterday.

Posted by bfreeceramics at 9:37 AM