Now and then I take on a commission.  Sometimes it's hardly worth the trouble which is why I think a lot of studio potters tend to steer clear of them and concentrate on their own style or ideas.  It can be difficult to work out what people want and what you think you can do for them in a timely manner.  Sometimes the person ordering just doesn't understand what goes into the making process of clay.  Sometimes it's definitely worth the work, such as in my case over the last two weeks.

I received an email from a local pizza man, Bob Marshal of Biga Pizza ( click that name!... a delecious wood-fired pizza place) in Missoula about creating a set of dishes for the Jewish holiday of Passover.  Specifically, a type of plate known as a Seder Plate.  It holds several types of food which all have very specific meanings.  If you'd like to know more about the Seder Plate and the ceremony click, here.

When I read the email and looked at the examples he sent I thought they were very very bright and extravagant... but I knew I could make something awesome for him in the time that we had, and something a little more classy.  I knew for the amount of money he wanted to spend and the time I'd have to put in that I could do it and still make some ok money at it.  I was into it because I felt like I could see the process from start to finish and wanted to know if I could accomplish it.  I'm also interested in religious ceremonial ceramics.  This is my second religious commission, the first being a communion set made for a Priest in Helena, Mt.  The following are pictures of my process.

The first part was to have a meeting with the man that was ordering these.  Luckily he was super cool with my ideas and I wasn't scared to say no about certain things that he wanted.  Time and money was a serious consideration. 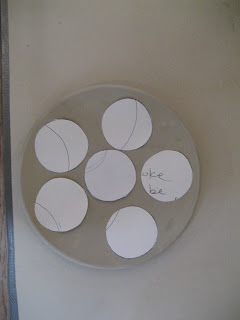 Before I threw the plates I needed to figure out what size the impressions needed to be.  I cut out some circles on paper and then drew the designs on them. 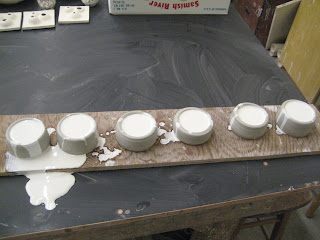 My next step was to throw six cylinders with a rounded bottom that would be filled with plaster for the stamps. 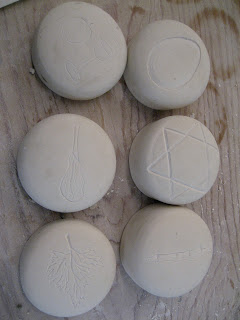 Once the stamps were out and still damp I carved my designs. 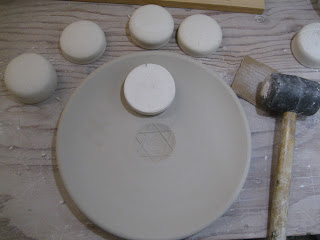 Once the plaster stamps set up long enough to withstand a good pounding and my plates were somewhere between soft and leatherhard, I gave each stamp a good pounding, leaving a shallow imprint where the food will be displayed. 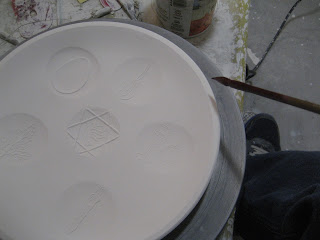 After trimming and bisque firing the next step was to apply a blue wash to the rim.  All I did was recenter the plate on my wheel and apply the wash with a brush. 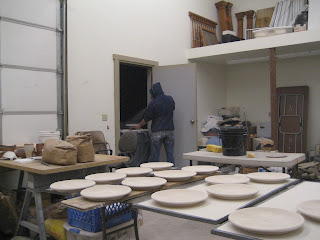 My next step was to spray a clear glaze.  This was a little nerve-racking for me because I don't have much experience with spraying glaze.... although I've seen it done plenty of times.  The studio I'm in doesn't have a spray booth, so I had to spray directly outside. 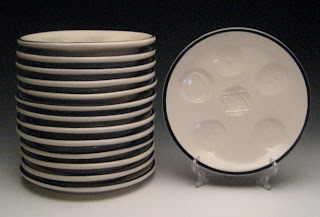 Fired to cone 6 in the electric kiln.  I'm glad to say that every plate came out perfectly.  Like most things that I do, each knew thing leads to something else.  I can always see things that can be improved upon. I think the blue wash came out too dark and the carving could have been less subtle.  I also learned that when I pound a stamp into a plate, the plate doesn't forget.  Nothing cracked, but there are some wavy rims and feet.  All in all I call this a success.   Happy Passover.
Posted by bfreeceramics at 2:55 PM