the last few weeks has been a total roller coaster ride.. for starters this is the first time I've had to make so many pots, in this particular style, with what seems to not be enough time to finish. i'm positive i'll be later then the 13th. my original plan was to fire the cat yesterday, and only today did I load my bisque. I wont be firing until wednesday evening...i think. it's been an interesting experience though and i've learned so much about how i truly want to work. i hate being slammed with pots to finish. when it's like that..it feels more like work then play. and i really hate going to work. i fell in love with clay because it wasn't work. and when i say work, i mean.. a feeling of resentment towards something you're being forced to do. it's not healthy to work a 14 hour day. so now that the bisque is loaded and firing, i have some time to chill.. put on my sweat pants, listen to some kimbrough and write up this step.. in the long line of steps it takes to get myself a finished pot.

my plan was to apply these decals to all the pots, but realized... i couldn't. (i have over 100 pots to fire.) i had to stop and say some of them will be good enough without them. and that's another thing that's hard for me to deal with.. saying, "well, it's good enough." that pisses me off too. but with new situations i'm sure i'll get something good out of it..and maybe the variety will make the finished group of pots more visually appealing. could be a lesson in acceptance. like.. well, i can't control it all and i can't do it all. i've reached my limit. 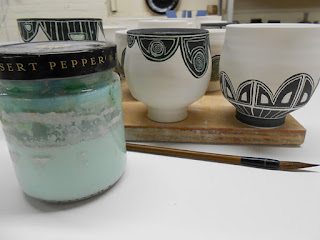 now on the to technical stuff.. first i have to wax off the black areas so i don't get the decals over lapping.. or i'll wax out a shape that the decals will fill. the wax layer also protects the black from getting smudged..which allows me to handle the pots more aggressively. once the pot is waxed and has time to dry a little, then i'll take a bit of decal and float it face down in water. this gets it super wet and ready to stick. it's so much faster then taking a wet brush or sponge to each decal... 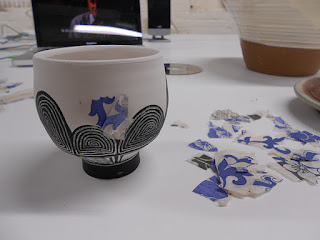 i purchased the decals a long long time ago, 2007, when i did a three month stay in Jingdezhen, China, while I was getting my bachelor's degree..and now, 5 years later, i'm putting them to use. i believe there's a booth at the annual NCECA that sells them. 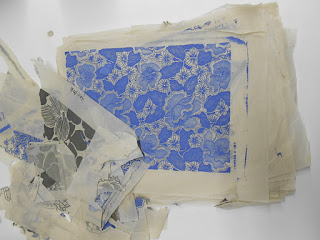 I never knew how to use them in the past 5 years..because I thought they looked sort of retarded.. without any kind of character. so a few months back when i was making pots for the holter's christmas show I had the idea to rip up a sheet into bits and add it that way..and the decals took on a whole new look. it gave my pots a new layer... it's a decal collage.. so that's it. after the bisque i'll wax resist more areas then apply a white slip (tony's crack) for another layer.... which will happen very soon, like tomorrow. ha!
Posted by bfreeceramics at 1:39 PM